The World's Least and Most Expensive Spices (and Why!)

Spices differ from herbs in that herbs come from the leaves or stems of a plant, while spices come from any other part, including the root, fruit, flower, or seed. The world of spices is actually very interesting, with each spice having its own unique history, flavor, and method of production. Spices also vary wildly in price, from just a couple bucks per pound to $10,000 per pound. The following are some of the world's most expensive and least expensive spices. (Of course, prices vary depending on your location and source, so this is just a rough guide.)

Cumin comes from the seeds of Cuminum cyminum, native to the Eastern Mediterranean, India, and Western Asia regions. Cumin is used in dishes from around the world, including Indian, Latin American and North African cuisine. Its huge global presence contributes to its low price. As with practically all other spices, ground cumin is cheaper than the whole form of the seed. This is because customers want to buy whole seeds that are well-formed and good-looking. Malformed or cracked seeds are picked out and made into ground cumin, thus creating the price disparity.

This spice is made from the dried fruit of the Piper nigrum plant. Although in centuries past, the use of black pepper was limited to the wealthy, nowadays it is among the most traded and most widely-used spices in the world. As with cumin, ground pepper is cheaper than whole peppercorns.

Cardamom is native to Southwestern Asia, but also grown in Guatemala and Costa Rica, and used in Indian curries, Arabian coffee, Scandinavian baked goods, and teas. You can expect to pay upwards of $30 for a pound of whole seeds. Cardamom is one of the most expensive spices because it must be harvested by hand, and the harvest season is very time-sensitive.

It might seem like a cheap flavoring found everywhere, but real vanilla beans can cost up to $200 per pound. These bean pods come from the vanilla orchid, native to Mexico. Its high price comes from its painstaking production: Vanilla orchids must be pollinated by hand, and when the bean pods are ready to be harvested, they then must be dried in the sun for two hours a day for six weeks. They're still not done, though; the dried pods have to be aged in a cool, dark place to intensify the flavor.

Saffron is by far the most expensive spice in the world, costing up to $10,000 for one pound. Its huge price tag comes from the fact that it is made from the stigmas of just one of the 75 species of crocus flower. The stigma is a tiny, thread-like part of the flower; each crocus only has three or four stigmas, and these are painstakingly harvested by hand. Saffron is so valuable that the industry is rife with counterfeit products and illegal smuggling. 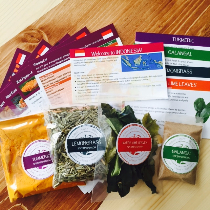 This guest post contribution is courtesy of Spice Madam, a Texas based company that has spices delivered to your door, and even offer a convenient spice travel kit for on the go.
Posted by Trying to go green at 10:32 AM