We were able to view the Adventure Time Frost & Fire DVD. We watched it as a family and thought it was really funny. I've seen the show before on the cartoon network, but found having it on dvd we had it playing and realized we watched like 10 episodes in a row. Once watching it i realized there were a lot of recognizable voice actors and i found myself googling the shows to see who the guest actors were. In all it was a great dvd to watch with the kids. 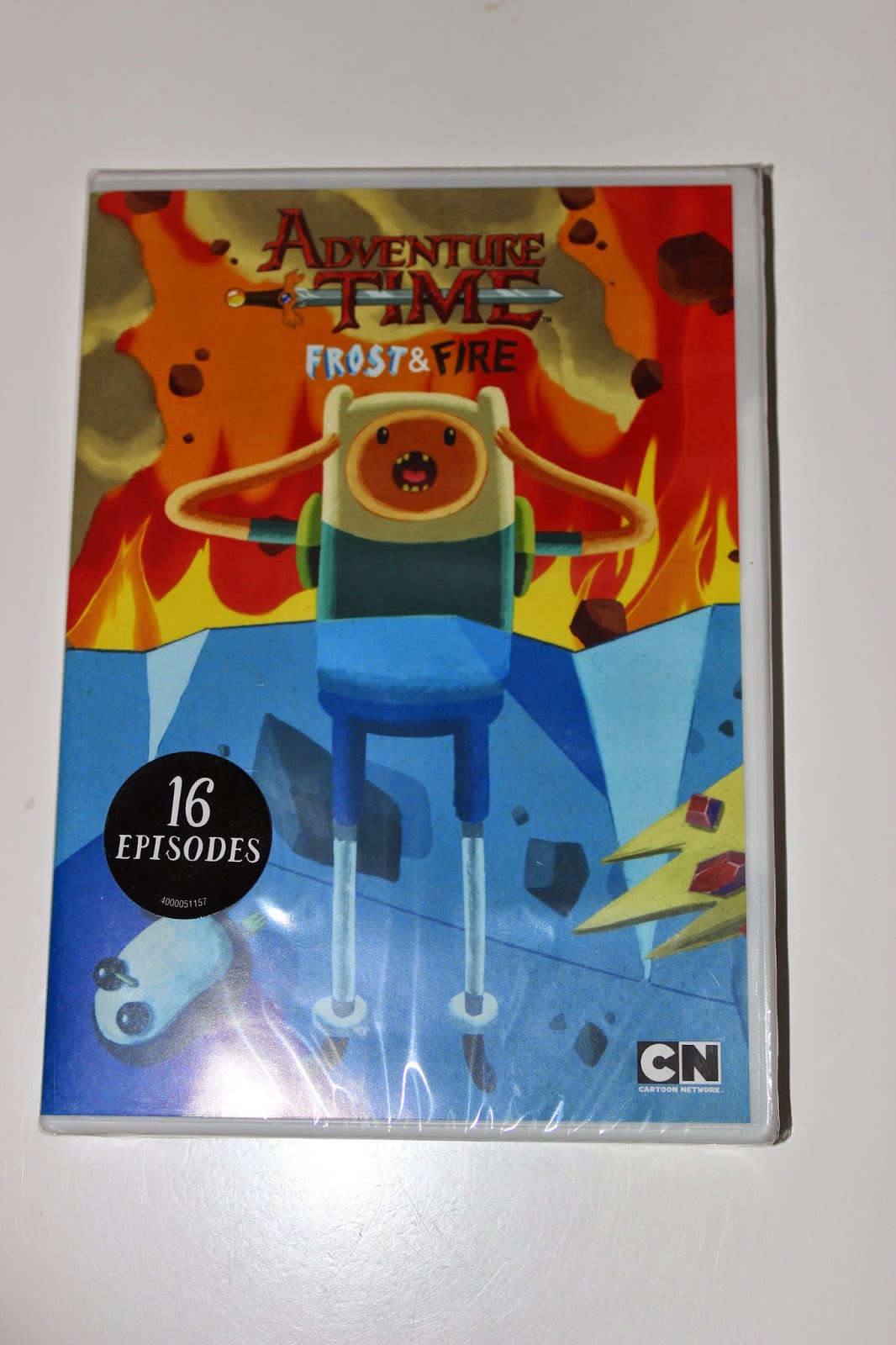 Things are heating up as Flame Princess and Ice King battle it out in the latest Adventure Time DVD release Adventure Time: Frost & Fire! Finn may be in over his head, but don’t worry, it’s not all fire and ice because this DVD is packed with 16 popular episodes with everyone's favorite characters from the Land of Ooo! Available on March 3 for the suggested retail price of $19.82, fans will be able to get their hands on nearly three hours of hot and icy content, with 16 popular episodes from the award-winning series, including:
1.     Frost & Fire
2.     Earth & Water
3.     Jake the Brick
4.     The Prince Who Wanted Everything
5.     Something Big
6.     Return to the Nightosphere
7.     Daddy’s Little Monster
8.     Joshua and Margaret Investigations
9. Davey
1 10. The Pit
11 11.  Freak City
12. Memories of Boom Boom Mountain
13 13. James
14 14. Time Sandwich
1 15. Apple Thief
16. Thanks for the Crabapples, Giuseppe

Adventure Time: Frost & Fire is the brand’s latest DVD release and joins the best-selling Adventure Time complete seasons one through four, as well as existing episodic releases,Adventure Time: Finn the Human, Adventure Time: Jake the Dad, Adventure Time: Jake vs. Me-Mow, Adventure Time: My Two Favorite People, and Adventure Time: It Came From the Nightosphere, among others, all of which are currently available at retail. Supported by a huge following that includes more than 18 million Facebook fans, this home entertainment franchise join a strong line of consumer products that includes toys, interactive, publishing, apparel, comics, costumes, posters, youth electronics, and much more. Additionally, Adventure Time continues to grow its roster of collaborators making co-branded products for the brand, with the latest addition Dr. Marten’s, launching a line of boots for juniors and adults that will be available at retailers worldwide this spring.
Created by Pendleton Ward, the Adventure Time television series is an original animated comedy from Cartoon Network that follows the everyday adventures of unlikely heroes Finn the Human and his best friend, the shape-shifting dog Jake, as they travel across the Land of Ooo and encounter its unique inhabitants. Whether it’s saving Princess Bubblegum, defeating zombie candy, mocking the “oxy-moronic” Ice King, or rocking out with undead music wiz Marceline the Vampire Queen, with Finn & Jake it’s always Adventure Time! New episodes of the Emmy® Award-nominated series debut on Cartoon Network on Thursdays at 7:30 p.m. (ET, PT) with re-airs throughout 2015.

About Cartoon Network
Cartoon Network (CartoonNetwork.com) is regularly the #1 U.S. television network in prime among boys 6-11 & 9-14. Currently seen in 99 million U.S. homes and 194 countries around the world, Cartoon Network is Turner Broadcasting System, Inc.’s ad-supported cable service now available in HD offering the best in original, acquired and classic entertainment for kids and families. In addition to Emmy-winning original programming and industry-leading digital apps and online games, Cartoon Network embraces key social issues affecting families with solution-oriented initiatives such as Stop Bullying: Speak Up and the Move It Movement.
Turner Broadcasting System, Inc., a Time Warner company, creates and programs branded news, entertainment, animation and young adult media environments on television and other platforms for consumers around the world.