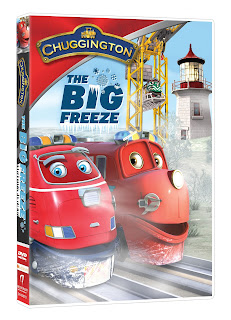 September 14, 2015 – Cool high-speed adventure is on the way to preschoolers nationwide with the newest “Chuggington™” DVD, “Chuggington: The Big Freeze”! The latest release in the popular DVD collection from Anchor Bay Entertainment is jam-packed with six fun-filled adventures – including a never before seen holiday special episode from the top-rated Disney Junior series. “The Big Freeze” pulls into retail on October 13, 2015, just in time to help families from coast-to-coast celebrate the season – Chuggington style!

The chuggers perform one heroic rescue after another in this cool new seasonal collection of “Chuggington” adventures! When icy temperatures cause the town to run out of fuel and all diesel engines are grounded, it’s wheels-to-the-rails as Chief Jackman and his team of brave Chug Patrollers work together to find a way to the frozen docks to retrieve fuel and get the town of Chuggington moving once again. Fans can join Fletch as he tries to repair the lighthouse, chug along with Calley as she tests to become a first responder, watch as Brewster gets closer to being a Chuggineer, and more! “The Big Freeze” will help teach little chuggers nationwide important lessons about safety, responsibility and teamwork as they ride alongside their favorite friends, Wilson, Koko, Brewster, and Asher!

Dove.org reports: “Now this is what good children’s entertainment is about! The stories are terrific, the characters are delightful, and the animation is awesome!” And, for double the turbo-charged adventures, Anchor Bay Entertainment will release in tandem the new-to-DVD dino-sized “Chuggington” title, “Wilson and the Dinosaur.”

Now in its fifth season on Disney Junior, “Chuggington” is a colorful and contemporary CGI-animated TV show from Ludorum that reinforces early social readiness skills. The series has become a global sensation since its debut in September 2008 in the U.K. The show has been licensed to more than 175 territories worldwide and has established ratings records in several key international markets, including the U.K., Germany, France and Australia. The series made its U.S. debut in January 2010.

About “Chuggington™”
“Chuggington” is a contemporary, action-based, energetic and vibrant CGI series for children ages 2-5. The series follows the adventures of three young trainees – Wilson and his friends Brewster and Koko – as they ride the rails and take on exciting challenges that test their courage, speed and determination. Along the way, and with help and support from a strong community of engines and people, they learn positive values and new skills that empower them to become the best trainees they can be. Further information is available at www.chuggington.com.