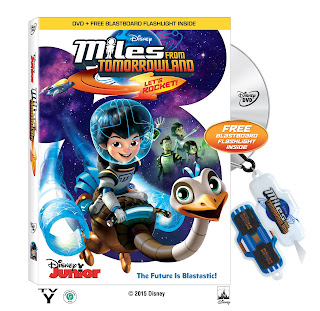 Each DVD Comes with a FREE Clip-On Blastboard Flashlight Plus Five Additional Episodes!


We received a copy of this new release to watch and we all loved it. I had never seen this show before since we do not have cable and it was really cute. It brings be back to my childhood watching the Jetsons so I really liked it also. It held my 5 year old's attention thru the whole movie.

Synopsis: Disney Junior's "Miles from Tomorrowland" is an intergalactic adventure that charts the outer space missions of young adventurer Miles Callisto and his family – mom and ship captain, Phoebe; mechanical engineer dad, Leo; tech-savvy big sister, Loretta; and best friend robo-ostrich pet, Merc – as they help connect the galaxy on behalf of the Tomorrowland Transit Authority. Miles, Merc and the Callisto family explore wondrous and diverse new worlds, taking young viewers and their families on a futuristic journey designed to fuel kids' natural interest in space, and at the same time reminding them of the importance of what lies close to home – the family bond.

Join Miles, his family and his best friend and pet Merc on a super-galactic adventure!  This value-packed DVD includes the premiere episode plus 4 additional episodes, nearly two hours of fun! Plus FREE inside every DVD is an exclusive Clip-on Blastboard Flashlight that you can’t get anywhere else! Buy your little space explorer “Miles from Tomorrowland: Let’s Rocket” on Disney DVD on August 11th!

Episodes: Runaway Shuttle/Surfin’ The Whirlpool
Ocean In Motion/Explorer Exchange
Game On/ How I Saved My Summer Vacation
Who Stole The Stellosphere?/Rock N’ Roll
To The Goldilocks Zone/Hiccup In The Plan

ABOUT THE WALT DISNEY STUDIOS:
For over 90 years, The Walt Disney Studios has been the foundation on which The Walt Disney Company was built. Today, the Studio brings quality movies, music and stage plays to consumers throughout the world. Feature films are released under the following banners: Disney, including Walt Disney Animation Studios and Pixar Animation Studios; Disneynature; Marvel Studios; Lucasfilm; and Touchstone Pictures, the banner under which live-action films from DreamWorks Studios are distributed. The Disney Music Group encompasses the Walt Disney Records and Hollywood Records labels, as well as Disney Music Publishing. The Disney Theatrical Group produces and licenses live events, including Disney on Broadway, Disney On Ice and Disney Live!.
# # #
© 2015 Disney