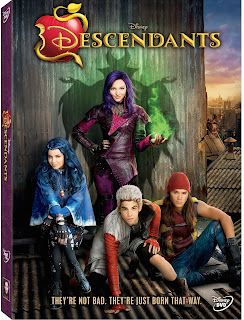 We were sent the new Disney Descendants DVD and all 3 of my kids watched it with me. I had never seen this show before but I really liked it and it held all of my kids attention. It was fun and action packed to keep them entertained. I love the morals of the movie and letting kids know that just because your parents are one way you have your own choice with your actions and who you want to be. 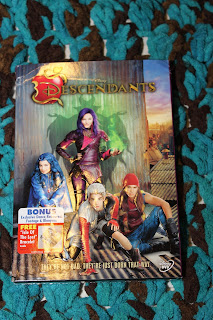 I love when the DVD's come with bonus material. This one came with a bracelet. 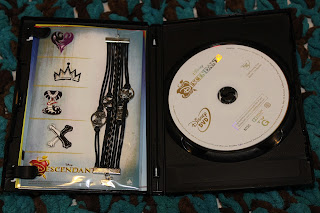 Synopsis: From the Emmy Award-winning director and choreographer Kenny Ortega (“High School Musical” franchise) comes this original contemporary story of classic Disney characters reinvented and the introduction of modern Disney lore.  Enter this new epic universe of relatable tween characters on a journey of self-discovery.  New on Disney DVD, and complete with never-before-seen bonus and a FREE bracelet!

In a present day idyllic kingdom, the benevolent teenaged son of the King and Queen (Beast and Belle from Disney’s iconic “Beauty and the Beast”) is poised to take the throne.  His first proclamation:  offer a chance at redemption to the trouble-making offspring of Cruella de Vil, Maleficent the Evil Queen and Jafar who have been imprisoned on a forbidden island with all the other villains, sidekicks, evil step-mothers and step-sisters.  These villainous descendants (Carlos, Mal, Evie and Jay, respectively) are allowed into the kingdom to attend prep school alongside the offspring of iconic Disney heroes, including Fairy Godmother, Sleeping Beauty, Rapunzel and Mulan.  However, the evil teens face a dilemma.  Should they follow in their nefarious parents’ footsteps and help all the villains regain power or embrace their innate goodness and save the kingdom?

Bloopers – Kristin Chenoweth and the cast crack-up on set.

ABOUT THE WALT DISNEY STUDIOS:
For over 90 years, The Walt Disney Studios has been the foundation on which The Walt Disney Company was built. Today, the Studio brings quality movies, music and stage plays to consumers throughout the world. Feature films are released under the following banners: Disney, including Walt Disney Animation Studios and Pixar Animation Studios; Disneynature; Marvel Studios; Lucasfilm; and Touchstone Pictures, the banner under which live-action films from DreamWorks Studios are distributed. The Disney Music Group encompasses the Walt Disney Records and Hollywood Records labels, as well as Disney Music Publishing. The Disney Theatrical Group produces and licenses live events, including Disney on Broadway, Disney On Ice and Disney Live!.
# # #