We like to keep alot of fresh fruits and vegetables in our refrigerator at all times and I was really excited to try out the Ozonator. 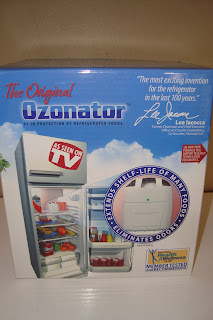 Refrigerator Ozonator™ is engineered for the harsh conditions of cold with high levels of humidity and are ideal for use in refrigerators. The Ozonator™ is a lightweight (9.1oz.) battery-operated ozone generator, with an exterior housing. It is constructed of a high quality ABS polymer plastic, requiring four (4) standard “D” size batteries for operation.
While generating ozone, the LED light on the front of the Ozonator™ glows green in color continuously. When in standby mode, the LED light blinks every 3.5 seconds. When the batteries are low the LED light turns red, suggesting it is time to replace the batteries. Battery life is estimated at approximately 4+ months (depending on quality and freshness).
The Ozonator™ uses a microprocessor to control its automatic operating system. After your Ozonator™ is activated, it will generate ozone continuously for the first 60-minutes of operation; then automatically switch to standby mode for 170-minutes. At the conclusion of the first standby mode period, the Ozonator™ will automatically activate itself to generate ozone for 10minutes. Then, it will repeat, again and again, a cycle of 230-minutes in standby mode and 10-minutes in generation mode until the batteries require replacement and you repeat the initial activation process by reassembling the upper half of the Ozonator™ with the lower half (battery compartment). 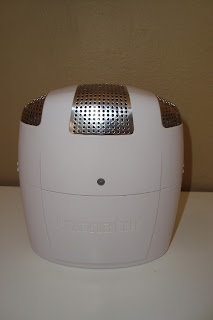 I have been using this for a little while and so far so good. We keep alot of fresh fruits and vegetables and they do not stay around long but we have not had to throw any out which is a big money saver for any family. I will continue to use this daily.
I received this item for review purposes. My opinions are honest and I was not paid for this review.
Posted by Trying to go green at 3:17 PM