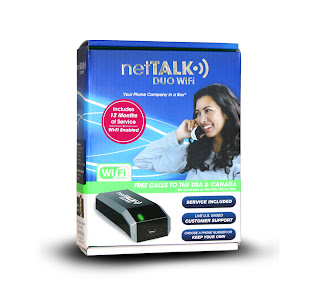 Miami, FL – – netTALK.com, Inc. ("netTALK"; OTCBB: NTLK), a telecommunications, consumer electronics and cloud technology company, announces that the netTALK DUO WiFi, the world’s first wireless VoIP telephone device, is now available online at netTALK.com and at major retail stores in the United States.
“With the launch of netTALK DUO WiFi we are continuing to be the first-to-market technology innovation leader, as compared to the competition,” said Anastasios ‘Takis’ Kyriakides, President and CEO. “The netTALK DUO WiFi offers the same award-winning, money-saving features, international call plans, number porting, and superior, personal customer service as the original netTALK DUO and that other companies in the space can’t keep up with. In addition, the netTALK DUO WiFi brings communication freedom to a whole new level, as it can easily be set up anywhere in the world with a Wi-Fi connection. It brings ‘cord-cutting’ to a whole new level!”
netTALK has been the dominant leader in the VoIP telecommunications industry over the last few years with:
· The netTALK DUO, the world’s first voice-over-IP (VoIP) device and digital phone service that didn’t require a computer to make or receive calls.
· The lowest cost, flat-rate international call plans in the industry.
· Live customer service and technical support.
· Nationwide number porting.
· Free 411 Directory Assistance (U.S. only).
· Fax-friendly service.
According to a recent study by Strategic Analytics, 25 percent of all households worldwide utilize Wi-Fi to connect to the internet – that’s over 493 million households. The report forecasts that this number will grow to approximately 800 million households, or a penetration rate of 42 percent, by 2016.
Mr. Kyriakides concluded, “At netTALK, we are relentlessly focused on serving the demands of our customers by providing convenience, value, and exceptional service. Saving hundreds of dollars on your home phone bill is easier than ever before now that customers can connect via wireless; which means customers can use their phone anywhere in the world, or place their phone anywhere in their house where there is access to Wi-Fi. Whether for a main line, a second line, a fax line, or just a line to use on trips, the netTALK DUO WiFi enables an unprecedented degree of communication freedom. That is truly something to TALK about!” 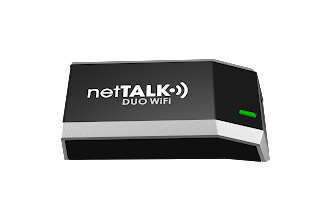 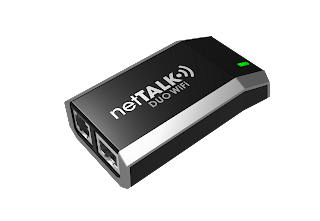 About the netTALK DUO and the netTALK DUO WiFi
Winner of PCMag.com and Laptop Editors’ Choice awards, and officially designated “Business-Ready” by PCWorld, the netTALK DUO is a revolutionary VoIP telephone device and digital phone service. The tiny netTALK DUO enables free nationwide calls to any phone in Canada and the U.S. from anywhere in the world, as well as low-cost, flat-rate international calling plans and a variety of other features, detailed at www.netTALK.com. No computer is necessary to make calls using the netTALK DUO, as it simply plugs directly into a modem (or computer). The netTALK DUO WiFi is the next step in the evolution of the netTALK DUO, by operating from any WiFi connection.
netTALK offers the following calling plans for the netTALK DUO and netTALK DUO WiFi (prices do not include tax):
Basic Call Plan: Free calling to U.S. and Canada; one full year included FREE with netTALK DUO and just $29.95 for each additional year (plus taxes)
North America Add-On: Unlimited calling to the U.S., Canada, Mexico, and Puerto Rico as low as $5.80 per month (plus taxes)
International Add-On: Calling to 60+ countries, including China, India, Brazil, UK, France, and more for as low as $10 per month (plus taxes)
The netTALK DUO is available in the U.S. via netTALK’s website; at over 1,000 Walmart Supercenters nationwide, and at a variety of other national retailers across the U.S. and Canada. You can also buy this at all Target Stores and online as well.

The netTALK DUO WiFi is now available in major retail stores across the country and online at netTALK.com. The netTALK DUO WiFi will be available in Canada starting in May at a suggested retail price of $74.95.
About netTALK.com, Inc.
netTALK.com, Inc. is a public company engaged in the design, distribution and sale of consumer electronics products and low-cost Voice over Internet Protocol (VoIP) services.
Follow us on Twitter, @nettalk; like us (and talk to us!) on Facebook: www.facebook.com/netTALK.
More information is at www.netTALK.com.

This service works great and we have since cancelled out other phone service that we had. You can hear great on it also. The only complaint I have been getting is when I call people it doesnt come up my name. But it is a great money saver since we do not use our home service that offten and we always have internet service going.

One Luchy TTGG follower will be winning the Net Talk Duo as well.