I got the oppurtunity to do this revirew for Magnabilities. Magnabilities officially launched nationwide in January of 2010 and is now leading the gift industry in magnetic interchangeable jewelry. Magnabilities is sold in over 3,000 U.S. locations and is distributed internationally.

In 2008 Susan invited neighbors Brent & Kari over to share an idea.
She had a fishing line around her neck and a washer hanging from it as her pendant. Susan began to move a magnetic insert off and on the washer. She then asked, "what do you guys think".

At this time, the three had been faced with extreme personal hardships both financially and otherwise. With families to support, they were up against a wall and literally had no choice but to make this bright idea work. After getting a few "less than perfect" protoypes together and setting up at craft show booths wherever they could find a good deal, the product began to sell one necklace at a time.

They converted their homes to production and shipping centers and had friends and neighbors over for "design nights" to help prepare product for the next show.  At shows, they would hope to bring in enough to pay the basic household bills, but shows weren't enough.

The response they recieved from customers at home parties and craftshows was so positive that they thought they should see if Magnabilities might work in the retail enviroment.

After many more hurdles, they finally landed in a store to test the waters. Timing was everything and they lucked out. They were lucky to have the privilege of meeting so many great people. Blood, sweat, and enough tears to fill the world's oceand later, Magnabilities has arrived.

I really like these and i reccomend them to anyone. They also make the perfect gift. You can but a piece and mix and match to fit with any outfit.

They sent me one of their heart neckalces with 3 Magnetic change out pieces. 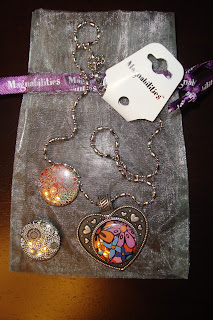 I recieved thses items for review purposes only. My opinions are honest and I was not paid for this review.